We take all kinds of health precautions every day. We lather on the sunscreen, spray ourselves with insect repellant, wear flip-flops in the locker room, wash our hands before we eat–all of these are great practices, and everyone should be doing them.

But with summer just around the corner, there’s one health risk we often overlook. Parasites are becoming more and more common, and the risk of becoming infected is even more prevalent in the warmer months.

In order to protect yourself from those little creatures who think they can just hitch a free ride inside of you, it’s important to know what’s out there. Here are four of the most common types of parasitic infections. Be warned, it can be a little disturbing. 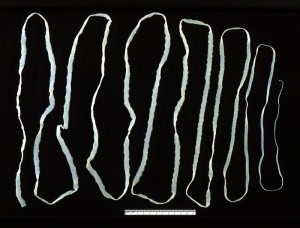 This type of parasite is easy to recognise–it looks like a long strip of, well, tape. Tapeworms grow by segments, and can reach lengths more than 55 feet (yikes). Usually, tapeworms take up residence in their host’s intestines, and can stay there for up to 25 years. What a thought.

Tapeworm infection in humans (or taeniasis) is usually caused by eating undercooked beef, pork, or fish. The problem with taeniasis is that there usually aren’t many symptoms, and many people are infected without even realizing it. Though very rare, it’s possible for tapeworm larvae to migrate to the brain, causing headaches and even seizures. 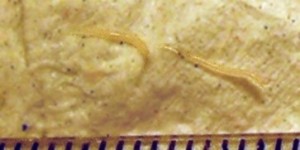 Pinworm infection, or enterobiasis, is the most common type of intestinal parasite infection in the United States. Pinworms are very small at 2-13 mm, and if you’re infected, you could have thousands of these worms in your body.

Pinworm infection is caused by ingesting pinworm eggs. The eggs themselves are tough, and can be found just about anywhere. In fact, according to the CDC, nearly 12% of the U.S. population is already infected. As such, prevention is difficult. Even people with great hygiene can be infected, as can their pets.

Fortunately, getting rid of pinworms is easy enough, and we’ll discuss that a little bit later.

So named because of the distinct curve at their tail end, hookworms are one of the most insidious of the intestinal parasites, and they are currently living in over half a billion people world-over (CDC, 2010).

A hookworm infection begins when a human or animal walks through soil that contains hookworm eggs. Unfortunately, given how hardy these eggs are, they can last in the soil for a good, long time, which increases infection rates.

Hookworm infections don’t produce symptoms often, especially if you’re eating enough iron. Infections are usually diagnosed if a person is found to be anemic or iron-deficient, since hookworms actually suck the blood out of the intestine wall. Furthermore, hookworm infections in children can cause stunted growth and impaired learning ability.

The best way to keep yourself hookworm-free is simply to always wear shoes outside and practice good hygiene. 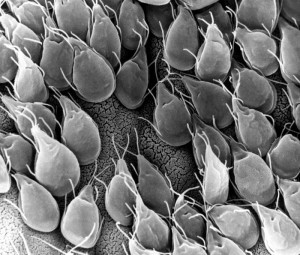 Commonly called “beaver fever” by hikers, giardia is a (usually) water-borne, microscopic parasite. Often times, people contract giardia by drinking water straight from a stream or pond without properly purifying it, but this parasite can also be found on undercooked food and in soil, making it one of the most prevalent parasitic infections in the world.

In the body, giardia causes diarrhea-like symptoms, which is usually very unpleasant but not life-threatening. It also doesn’t last long; cases of giardia infection usually clear up in about a week even without treatment.

Prevention is fairly easy. Just boil any water you come across while camping or hiking, and make sure to cook your food. And as with all the parasites listed, wear shoes when you go outside.

WHAT TO DO IF YOU’RE INFECTED

At some point in your life, odds are that you will contract one parasite or another. It’s just an unfortunate fact of life on Earth, and infections become even more likely during the summer. Fortunately, there are ways to get rid of just about any parasitic infection–both safely and naturally.

For a safe, 100% natural, side-effect free way to rid yourselves of those pesky critters, look no further than our own Premium Parasite Cleanse and Detox. It effectively flushes out intestinal parasites like the ones mentioned above. 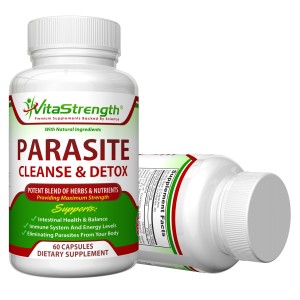 And because it’s all natural, you can take it even when you think you might be infected, without have to worry about potentially harmful side-effects. You can even throw it in your backpack and use it as a preventative on a long camping trip.

Ultimately, while it’s important to be aware of the risks, most parasites are not life-threatening. Uncomfortable, yes, but treatable. All it takes are simple preventative measures, and you can remain parasite-free all summer (and winter) long.

And if you take away nothing else from this post, hopefully one thing has become clear: always wear shoes when you go outside.

Click here to read more about our Premium Parasite Cleanse and Detox.