In the grand scheme of human’s time on Earth, herbs and medicinal plants had been the go-to form of healthcare for every ailment–until very recently. Things have changed since then. Nowadays, you can hardly walk down the street without seeing an advertisement for the latest pharmacological advancement.

This is partly due to increased knowledge of how the body works, what can go wrong with it, and how it can be fixed. But as the scientific community does more research, the more they are finding that some natural remedies are actually valid treatments for many of the health issues that plague Americans.

One such issue is also one of the most prevalent diseases in the world: depression. Affecting nearly 15 million American adults and 1 in 8 adolescents (DBSA, 2016), depression can greatly reduce quality of life for almost anyone. As such, there are many medications out there to treat it.

Unfortunately, many of these prescription medications come with adverse side effects. Commonly, users can experience anything from impaired sexual function to trouble sleeping at night. If you’re exhibiting symptoms of depression but are hesitant about such side effects, what are you to do?

Well, there just so happens to be a little green plant called Hypericum perforatum, or Saint John’s wort. This flowering plant has been used for years as a natural remedy for depression. It works, but thanks to some really convincing scientific studies, you don’t have to take my word for it. 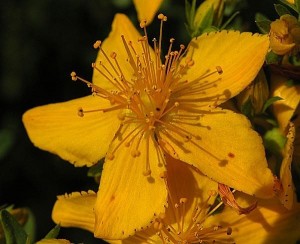 Many prescription antidepressants work by blocking the reuptake of serotonin and/or dopamine by your nerve cells. No one actually knows how this helps depression–only that it does. One theory is that this blocking causes those neurotransmitters to remain in the gap between the cells and this somehow helps correct chemical imbalances in the brain.

We may not know much about the actual mechanism, but the results are very obvious. Now comes the interesting part.

Basically, in several clinical trials, St. John’s wort was found to work just as well as any of the prescription medications–the entirely natural way. These studies are significant because they proved that a traditional alternative remedy for depression and anxiety is just as effective as people have been claiming for centuries.

Note: Before you replace your own medication, make sure to speak with your doctor first, and read the disclaimer at the end of this post.

How Should You Take It?

There are no hard and fast dosage recommendations for taking St. John’s wort, but it appears that the most effect dose for depression and anxiety is 900-1500 mg a day of 3% standardized hypericin (the main active constituent of St. John’s wort). So, you’ll want a supplement that provides right around 500 mg per pill, that you can take twice daily. 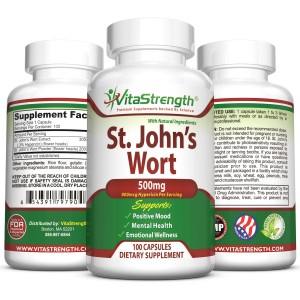 VitaStrength’s St. John’s Wort supplement provides precisely this dosage. Our formula is a pure extract and powder mix, giving you the highest-quality natural antidepressant available! If you’ve decided to give St. John’s wort a try, head on over to our store for more information.

These days, people are becoming more and more educated as to the true effectiveness of natural supplements. Even doctors are hopping on the “alternative” medicine bandwagon, and with good reason. St. John’s wort has been found to effectively treat the symptoms of depression and anxiety in precisely the same way as the expensive–and, in some case, risky–prescription antidepressants.

Recovery from depression can be a tough journey, but with a talk to your doctor and a little help from some natural supplementation, you can be well on your way to getting there.

Disclaimer: St. John’s wort can lessen the effectiveness of certain medications such as indinavir, irinotecan, cyclosporine, warfarin, and some birth control. Also, don’t take it with any other antidepressants, as the cumulative effect can do more harm than good.