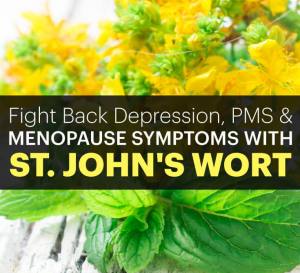 St. John’s wort, also known as hypericum perforatum, is a flowering plant of the genus Hypericum and has been used as a medicinal herb for its antidepressant and anti-inflammatory properties for over 2,000 years. The Greek physicians of the first century recommended the use of St. John’s wort for its medicinal value, and the ancients believed that the plant had mystical and protective qualities.

St. John’s wort uses, dating back to the ancient Greeks, included treatment for illnesses such as various nervous or mood disorders. Scientists believe it’s native to Europe, parts of Asia and Africa, and the Western United States. St. John’s wort was given its name because it blooms around June 24, the birthday of John the Baptist, and the word “wort” is an old English word for plant.

The genus Hypericum consists of approximately 400 species of herbs and shrubs that have yellow or copper-colored flowers with four to five petals, numerous stamens and a single pistil. St. John’s wort is native to Europe but is commonly found in the United States and Canada in the dry ground of roadsides, meadows and woods. Although not native to Australia and long considered a weed, St. John’s wort is now grown there as a crop, and today Australia produces 20 percent of the world’s supply.

Pharmaceutical companies, particularly in Europe, prepare standard formulations of this herb that are taken by millions of people. Today, worldwide annual sales of products made from St. John’s wort exceed several billion dollars!

St. John’s wort produces dozens of biologically active substances, but hypericin and hyperforin have the greatest medical activity. Other compounds, including the flavonoids rutin, quercetin and kaempferol, also appear to have medical activity.

Many studies show that St. John’s wort may help fight mild to moderate depression and anxiety and has fewer side effects than most other prescription antidepressants, such as loss of sex drive. However, it does interact with a number of medications, so it should be taken only under the guidance of a health care provider, especially if you already take medications for depression.

In many studies, St. John’s wort uses seem to work as well as selective serotonin reuptake inhibitors (SSRIs), a popular type of antidepressant that doctors often prescribe first to treat depression, such as Prozac, Celexa and Zoloft. According to the University of Maryland Medical Center, researchers aren’t exactly sure how St. John’s wort works; some have suggested that the herb acts similar to a SSRI because it makes more serotonin, dopamine and norepinephrine available in the brain. These neurotransmitters help improve your mood and can be responsible for treating symptoms of depression.

St. John’s wort uses also include improving mood in people with SAD, a type of depression that occurs during the winter months because of lack of sunlight. SAD is usually treated with light therapy, and there is some evidence that using St. John’s wort together with phototherapy works even better as a way to beat the winter blues.

Because of its positive effects on mood, St. John’s wort has been used to alleviate and naturally remedy PMS symptoms, such as depression, chronic fatigue and hormonal imbalance.

A study done at the Institute of Psychological Sciences in the United Kingdom included 36 women aged 18–45. They had regular menstrual cycles and were diagnosed with mild PMS. The women were randomly assigned to receive either St. John’s wort tablets at 900 milligrams a day or identical placebo tablets for two menstrual cycles; then the groups switched doses and the next two cycles.

Symptoms were rated daily throughout the trial using the Daily Symptom Report, and the women reported on feelings of depression, aggression, hormone balance and hormonal stimulation. The trials showed that St. John’s wort is superior to a placebo in improving physical and behavioral symptoms of PMS, but there were no significant effects compared with a placebo in treating mood and pain-related PMS symptoms. Researchers reported that daily treatment with St. John’s wort was more effective than placebo treatment for the most common physical and behavioral symptoms associated with PMS, and further work is needed to determine whether pain and mood symptoms benefit from longer treatment duration. 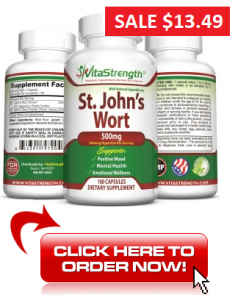 St. John’s wort uses include being tested as an herbal remedy that relieves the psychological and vegetative symptoms of menopause. A study published in Advance in Therapy and performed in Berlin, investigated 12 weeks of treatment with St. John’s wort; 111 women, ages 43 to 65, took one 900 milligram tablet three times daily. All of the participants experienced symptoms characteristic of the pre- and postmenopausal state.

The treatment outcome was evaluated by the Menopause Rating Scale, a self-designed questionnaire for assessing sexuality, and the Clinical Global Impression scale. To test the results, the incidence and severity of typical psychological, psychosomatic and vasomotor symptoms were recorded after five, eight and 12 weeks of treatment. Substantial improvement in psychological and psychosomatic symptoms was observed, and menopausal complaints diminished or disappeared completely in 76 percent of the women; in addition to this, sexual well-being also improved after treatment, displaying that St. John’s wort uses include providing natural menopause relief.

St. John’s wort has antibacterial properties and may also help fight inflammation that’s at the root of most diseases. When applied topically, it relieves symptoms associated with minor wounds and skin irritations, working as a natural treatment for eczema, a home remedy for burn relief and a way to naturally treat hemorrhoids.

Extracts of St. John’s wort have been used for thousands of years to treat cuts and abrasions. Its usefulness in reducing inflammation is well-known and appears to be related to its ability to serve as an antibacterial agent.

In a 2003 study at the Department of Dermatology at the Freiburg University Clinic in Germany, 18 patients with eczema were treated twice daily over a period of four weeks. After the trial, the severity of the skin lesions improved on sites of treatment, and skin tolerance and cosmetic acceptability was good or excellent with the St. John’s wort cream.

Obsessive compulsive disorder is a mental disorder where people perform certain routines repeatedly and are unable to control their thoughts or activities. This can be a debilitating condition, so the data that suggests the positive effects of St. John’s wort are indeed promising.

A study done at the Dean Foundation for Health Research and Education analyzed 12 patients who were diagnosed with OCD; the participants were treated for 12 weeks, with a fixed dose of 450 milligrams of 0.3 percent St. John’s wort twice daily. The study included weekly evaluations that were conducted with the Yale-Brown Obsessive Compulsive Scale, the Patient Global Impressions of Improvement Scale and the Clinical Global Impressions of Improvement scale, and a monthly evaluation with the Hamilton Rating Scale for Depression.

Significant changes occurred within one week and continued to increase throughout the trial. At the endpoint, five of the 12 patients were rated “much” or “very much improved” on the clinician-rated CGI, six were “minimally improved,” and one had “no change.” The most common side effects reported were diarrhea and restless sleep. Because improvement began at one week, and grew over time, researchers believe that St. John’s wort can be a helpful tool in treating OCD, and more placebo-controlled studies should take place in the future.

Researchers have found that St. John’s wort stops the growth of tumor cells and can treat both nonmelanoma and melanoma skin cancer cells. Because St. John’s wort has shown to have significant antitumor activity, researchers suggest that it’s an effective cancer-fighting treatment that’s available in abundance because it’s a naturally occurring plant.

Data from a 2003 study done in Spain indicates that hyperforin, a derivative found in St. John’s wort, is a compound that interferes with key events in angiogenesis — the formation and growth of cells. This confirms the recent and growing evidence about a potential role of this compound in cancer and metastasis inhibition and makes it a promising drug for further evaluation in the treatment of angiogenesis-related pathologies.